Joined 3 mo ago
·
86 Posts
Picked up another Tenor project. This time a Paul Cavour Tenor - Invicta model. Research suggests it’s a 1930s model, possibly French made. Any info would be gratefully received. It needs a complete overall, including all pads felts etc, a few dents to knock out and a guard to resolder. The tenon has suffered a ding so I have made a tool to get it back to round, its 99% there but I will turn up a final one to get it perfect. It came with the most knackered Selmer case I have ever seen. I may try to revive it as it has a space for a clarinet and flute. It would be very nice if restored.

Joined 3 mo ago
·
86 Posts
Couple of pics of some of work needed. Will get some better pics as I work through it.

Joined Dec 22, 2006
·
39,174 Posts
This is certainly a stenciled saxophone, wehther French or not may depend on its features (which unfortunately aren’t visible by the pictures).

Paul Cavour saxophones aren’t rare, especially in England (we’ll see why), any search on the internet will reveal many of them, and will also reveal a lot of speculation on their origin

There have been previous threads (as almost always is) and I suggest in future to continue one such old thread (even though old) because it may return more information ( members still active will receive a notification and they are obviously interested and may have information) while keeping information in one place. Pictures of those older posts are unfortunately, gone

The pictures that I can find around the net of Paul Cavour Horns may often point to a French origin (after all they had lots of makers over there), but there were some of these made in Italy (at least one auctions calls “ Italian”) and since some explicitly say “ Made in Italy”, we can be certain that Paul Cavour ( if there ever was a person with that name or maybe the brand was inspired by Camillo Benso of Cavour, first Italian Prime minister) 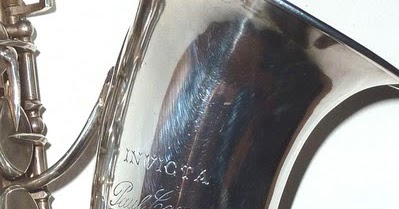 There are Pierret, Lyrist or Rampone & Cazzani attributions so, we know, for sure that these two avenues are the possible ones, there may more!

so, despite the Paris (model) designation Paul Cavour may have been an Italian brand


stitch said:
Photos would be good. These turn up on eBay from time to time, but apart from the fact that Paul Cavour was Milan-based, I can't add anything to dr.jazz's comment. The fact that it's marked Paris suggests it's a stencil, so photos could help identify the maker. The info re the bell orientation rings a vague bell - have you checked SaxPics?
Click to expand...

I would suggest to place an inquiry with Claudio Zolla at Rampone & Cazzani, they may actually know (although their knowledge of these things may be simply anecdotal since the company went through different ownerships through the years while loosely staying “ within the family” )


Just to give an example, this “ Paul Cavour “ saxophone ( different from yours) is CERTAILY a Rampone & Cazzani made one

Joined 3 mo ago
·
86 Posts
Thanks, I was aware of the Italian connection, the Invicta model that I have was French made as far as I can determine from the research I have done. I spent a while stripping it yesterday and it mostly went well. It’s a scruffy old thing and only worth doing DIY as the cost of repair would far outweigh its value. Two screws were rusted and had no heads so they will need a little work. I have ordered a 2mm LH drill bit which should see them moving (the threaded section seems ok on both). One screw is a random replacement of the wrong size. All the pads are intact but of mixed vintage, presumably replaced as hoc as required. All tone holes are level which is a bonus. A couple of springs are broken and many will need replacing. Most of the guards have been off at least once in its life. I have taken some pics but they are on my phone so I will get them up later.

Joined 3 mo ago
·
86 Posts
I will try and get some pics up ASAP. The project is going slowly due to work commitments and practice for a single I am working at mo but there has been progress. The strip down went ok. There are a couple of stuck screws, they have been soaking for a few days but the heads are almost none existent so I have ordered a small left hand drill bit to get them out. A general clean up has shown a few marks and small dents that I will get out. I have to mention a couple of products here, the first is a silver polish called Twinkle, I hadn’t heard of it before but got some after reading great reviews on here from some of our American friends. They weren’t wrong and it’s the best silver polish I have ever used. Most oxidation is removed with a simple wipe over. Brilliant stuff. The second is a replating solution That I thought I would give a try after reading good reviews. It isn’t quite as good as electroplating but for touch ups on the body it does a stunning job. Pads and a few other spares arrived today so I can crack on as soon as time allows.

Joined 3 mo ago
·
86 Posts
I still haven’t got around to taking any pics (sorry) but lots of progress today. All the keys have been polished and I started the repad. For now I am using some spare pads I had lying around and will then order any I need to complete the job. I love working with shellac, it’s such a forgiving material and so flexible. Still waiting on a couple of bits to arrive so I can get on with some other jobs and found that a big pack of springs I have are all too thin a gauge. That’s a shame.
1 - 7 of 7 Posts
Join the discussion
Continue with Facebook
Continue with Google
or sign up with email
About this Discussion
6 Replies
3 Participants
Last post:
CJ1972 4 d ago
Sax on the Web Forum
A forum community dedicated to saxophone players and enthusiasts bought to you by Harri Rautiainen. Come join the discussion about collections, care, displays, models, styles, reviews, accessories, classifieds, and more!
Full Forum Listing
Explore Our Forums
Sax Repair, Maintenance and Modification Misc. Saxophone Discussion Tenor mpc SOTW Member Recordings & Reviews General Mouthpiece Discussion
Recommended Communities