Joined Feb 3, 2003
·
1,943 Posts
Over the years I've accumulated several of these & I think there's another one somewhere - anybody know much about them / what era they're from? 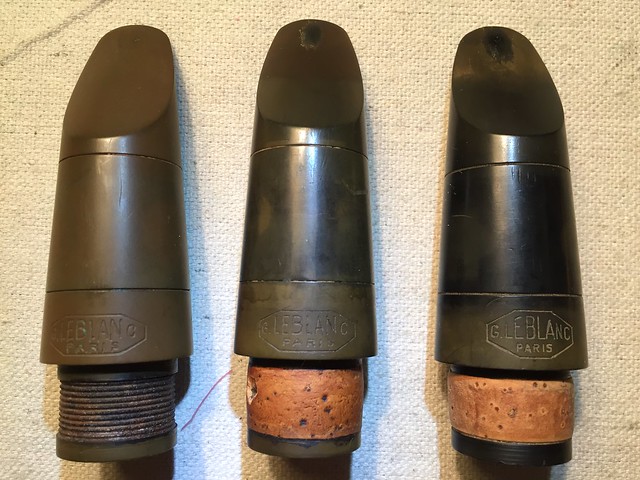 ​
I don't really play clarinet; I think most of these showed up in sax cases.

Joined Feb 2, 2003
·
9,201 Posts
There is some info here on the clarinets. The mouthpiece logos may or may not change at the same time.

They are probably of the ’60. Vito Pascucci was the owner of the brand at some point. This will probably be made after he acquired the company in 1946. I wouldn’t attribute particular significance to the term “ Paris “ .

milandro said:
They are clarinet mouthpieces from Leblanc, one of the most famous brands of clarinets .

Thanks. Figures, seeing how I accumulated three or four without even trying.

Joined Feb 3, 2003
·
1,943 Posts
FWIW I dug out my clarinet & played the two with cork on ‘em - as well as I could using soprano sax reeds which is all I could find. This worked out better than I expected, especially given I haven’t played the thing in several years.

One of the Leblancs is stamped 2, the other what looks like 3L. They are both broad and dark. The 3L especially. It’s more resistant, but the tip is rounder than the other so the soprano reed wasn’t working as well on it. I am not a big fan of shrill clarinet tones, so I found the upper register on that one very nice.

I compared them against an old Vandoren 2RV, which I think is what became the current 5RV. It gets a brighter, rounder tone than either Leblanc, but the #2 plays like a dark version of the 2RV.

The 2RV incidentally has a nicked up facing but still plays easily. That’s the keeper, but but I’ll probably keep one of the Leblancs too, after I get some proper reeds to try out on them.
1 - 5 of 5 Posts
Join the discussion
Continue with Facebook
Continue with Google
or sign up with email
About this Discussion
4 Replies
3 Participants
Last post:
Hornlip Jan 12, 2020
Sax on the Web Forum
A forum community dedicated to saxophone players and enthusiasts originally founded by Harri Rautiainen. Come join the discussion about collections, care, displays, models, styles, reviews, accessories, classifieds, and more!
Full Forum Listing
Explore Our Forums
Misc. Saxophone Discussion Sax Repair, Maintenance and Modification Tenor mpc Word games SOTW Member Recordings & Reviews
Recommended Communities