For those who dis deep seats

Joined Feb 22, 2011
·
2,016 Posts
Yes, for those of you who think that pads must be hard and have no or little crease, please take that up with the makers of this lovely machine.

Image is borrowed from the Silver bells thread with appreciation to the member posting it.

Joined Nov 30, 2011
·
3,682 Posts
It is true that years ago pads were not waterproof, had softer felt and "seating" them using clamps and sometimes a "pad oven" to produce a deep indentation was the standard practice. If someone wishes to install pads like that on their own instruments these days, that's their choice. If someone were to close the bell key pads shown in the photo using light pressure in a darkened room with a leak light any areas that do not touch the tonehole at the same time will probably not be seen. That is just one of several reasons I don't choose to install pads in that fashion. The other end of the spectrum where there is a light impression of the tonehole rather than a "deep seat" is shown in the photo below is my preferred method of pad installation.

Joined Feb 22, 2011
·
2,016 Posts
Just a quick response - if all things are in order, the depth of the seat would not be a factor whether using a light or heavy touch. Also, with a seat that deep, I doubt a leak light would be revealing particularly if the pad were touching the inner or outer wall but not the surface of the TH.

It's seats like yours that keep 'em coming back for adjustments.
B

StuartSax said:
with a seat that deep, I doubt a leak light would be revealing particularly if the pad were touching the inner or outer wall but not the surface of the TH.
Click to expand...

It's sealed regardless, right? (serious question, not meant to be argumentative)
1

bvandrasik said:
It's sealed regardless, right? (serious question, not meant to be argumentative)
Click to expand...

We don't know. That image was from another thread. SotW member "sax0naut", owner of that R&C "Two Voices" tenor, sold it.

bvandrasik said:
It's sealed regardless, right? (serious question, not meant to be argumentative)
Click to expand...

In my experience it is difficult to tell if the pad is making contact with the tonehole 360° or not using a leak light when the top of the tonehole is blocked from view inside the groove of a deep pad "seat". In professional repair it is standard practice is to adjust regulation when one key closes another with a light key pressure. It is in this area of repair where deep seats in the pads make precise adjustments difficult if not impossible to carry out.

Dr G said:
We don't know. That image was from another thread. SotW member "sax0naut", owner of that R&C "Two Voices" tenor, sold it.
]
Click to expand...

Your familiarity with Borgs may provide some insight. I've had a couple of Grassi Prestiges. They had thicker pads than are available in the US and wore deep seats from new. Is that consistent with Borgani?

Datsaxman, with all things being equal, why would travel of 1/2mm make for harder work? I just can't see how a minimal seat on a hard pad can provide consistency for the player. Any movement of the key could cause problems. It is also fair to note, old school players survived just fine with traditional factory setups. Many I've met were loathe to even have their horns worked on for fear it wouldn't play the same.

To each his own.

Joined Feb 12, 2009
·
19,023 Posts
I am following this thread with some interest and I think there are two sides to it. I am not actually gonna chime in with my own opinion.

It seems as far as this subject goes, the main argument against deep-seated pads is: if they are leaking, it is hard to tell they are leaking because, as stated above, a light test may not make the leak visible due to the depth of seat.

A secondary argument (one which I have not heard before) is that deep seats make the horn harder to play, or require something different in finger pressure or result in a different 'key action' feel....

There is a third argument (not mentioned here, but on other threads) which = 'deep seats cause the pads to leak more'.

The only contribution I will make here is: I have serviced countless horns with deep-seated pads. Some horns had leaks, others not. Once adjusted, either by key bending or refloating....the leaks were gone. In the time after adjustment that the horns remained here (which could have been 2 days or 3 months), the leaks did not reappear to any degree where I would conclude "deep seats are less stable".

I would say, stating the obvious, that generally deep seated pads generally are softer or thicker pads which can take that sorta seat. Certainly the 'feel' of softer pads under the fingers is gonna be different. Some might well say it changes the action or response. But I would posit this isn't because of the seat, but because of the firmness of the pad.....

I have had good results with light seats on hard pads on my own horns. It helped me learn to use lighter force against the keys too.

StuartSax said:
Your familiarity with Borgs may provide some insight. I've had a couple of Grassi Prestiges. They had thicker pads than are available in the US and wore deep seats from new. Is that consistent with Borgani?
Click to expand...

Not the issue with Borgani - pads were the commonly available thicknesses.

Seat depth was similar to that I've seen on modern Selmers.

Joined Jul 26, 2011
·
1,913 Posts
I would also think there is a time factor, no? That is, from the day a new thicker, softer pad is installed until it reaches a steady-state (fully deeply seated?), there is a continuous slight change in feel. The feel under the fingers on day one is going to be very different than on day...> X <

I'm guessing, the best of all worlds is the dull happy medium. Not so deep/soft or so hard/shallow

I was confused by the idea of the seat (seat "wall"?) contacting the inside or outside of the tonehole. Does that in turn, count as a plus or minus?
B

Joined Dec 24, 2015
·
325 Posts
When I had my VI overhauled by the East coast’s self-proclaimed premier saxophone tech, not only did he set the pads up with the deepest seat I had ever seen, he also returned the horn with key clamps which he urged me to use all the time. Apparently he sets up all his overhauls like this.

Not only did the deep seat make the action feel sluggish, it guaranteed that I return to his shop on three separate occasions to address the same leaky bell key issue. Not once had I ever seen him use a light to search for leaks.

I got fed up with his shenanigans (why don’t you play test the horn? To which he responded, “I play-tested it with my mind” ... which was the breaking point for me).

Soon thereafter I found my dream tech. His opinion was that the tech used deep seats to try to hide the fact that his overhaul does not include leveling of tone holes. So hiding crappy and incomplete work is another reason for deep seats.

Billy Baggins said:
"I play-tested it with my mind"
Click to expand...

Joined Feb 3, 2003
·
1,931 Posts
Since Saxoclese posted a Buescher with white pads up thread, FWIW here's the pad impression from what is probably the factory set up on a 1926 Buescher alto. Very clean horn that didn't get much play time before I got it. My tech tweaked it, replaced the low Eb and it played fine on those pads for a good while before they started to tear. I had it apart recently to polish it.

The white pads are a little different from the regular tan snap-ons, the leather seems a bit softer, or smoother. What you see above is average for the impression on most of the pads. 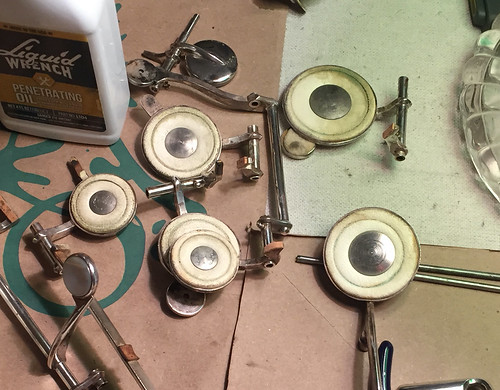 1saxman said:
Whatever Selmer does is what I want. AFAIK, they're still doing what they always did.
Click to expand...

Perhaps you were being sarcastic???

For at least a decade - possibly 2, Selmer used the stickiest pads I have ever encountered.
And they seemed to imagine that clamping in transit would deal with any adjustment necessary.
The fact that Selmer does something most certainly does not make it the ideal. There are many other mechanical examples on their saxes over the last few decades.

Joined Nov 30, 2011
·
3,682 Posts
Another issue I have seen with pads with deep seats is the tendency to sound and feel sticky. It makes sense that the leather making contact with not only the tops of the toneholes but the sides as well would have this tendency. This effect is even more exaggerated when the toneholes have slight burrs from the factory.

Joined Jun 27, 2003
·
5,065 Posts
First, it looks like the lighting in that photo makes those seats look especially deep (you can tell the type of light and direction from the sax shadow).

If I understand, the idea is that a saxophone maker with such nice engraving (R&C in this case) must know what they are doing so deep seats are good...? It is possible but you definitely can't assume that...

For example, another maker that was mentioned here (Borgani), which also makes saxophones that are good in many ways, has the absolute worst design of the low C# linkage on their sopranos. It's not just terrible technically, it affects the feel significantly.
Just like that poor C# design isn't a sign that they know nothing... something good about the sax doesn't mean something else is also good (BTW I told them about the design problem, they were happy to hear, years later... it is still exactly the same).

The most obvious problem of deep seats was mentioned (sometimes hard to check with light).
If the condition is stable and the pad touches the tone hole rim about at the same time all around, it doesn't really matter what the depth of seat is.
If there is a deep seat it could be a sign that the pad was forced closed very hard, so likely to spring back unevenly and not seal well with a light touch.
It could mean that the pads are softer so naturally take a deeper seat, which some players might like (the feel), most don't IME.
So deep seats could be a symptom for a problem but not the problem itself (with the exception of making it hard to check with light).

BTW I don't use particularly firm pads, at least I would call them medium-firm at most (usually Music Center - FKA Pisoni - Premium Deluxe or PRO). They pretty much never develop a very deep seat. They have the firmness I prefer most of the time and never had anyone complain about them being too soft or too firm.
1 - 19 of 19 Posts
Join the discussion
Continue with Facebook
Continue with Google
or sign up with email
About this Discussion
18 Replies
13 Participants
Last post:
clarnibass Dec 23, 2019
Sax on the Web Forum
A forum community dedicated to saxophone players and enthusiasts originally founded by Harri Rautiainen. Come join the discussion about collections, care, displays, models, styles, reviews, accessories, classifieds, and more!
Full Forum Listing
Explore Our Forums
Misc. Saxophone Discussion Sax Repair, Maintenance and Modification Tenor mpc Word games SOTW Member Recordings & Reviews
Recommended Communities